One of the toughest parts of bringing Lucy back into work is deciding when she's ready to take it up a notch with what she is doing under saddle. So far there have been no signs of any soreness at all but I am erring on the side of caution because I am well-aware that one instance of overdoing things could set her back quite a bit. At the same time, though, not asking her to do enough could also work against her.

Amanda is now riding her two days a week and I've been thinking about how to design a programme to bring Lu back into fitness while still maintaining her comfort level in her back. I do think that ultimately, Lucy would benefit from working under saddle 4-5 days a week, with 2 or 3 of those rides being w/t and the remainder asking a bit more out of her, like some cantering or working in a baby frame. I could also lunge her in the fauxssoa on the days I want her to work a bit if Amanda is not riding.

Over the weekend, Amanda rode twice: a 45 minute hour walk-only trail ride on Saturday, and then a 2 hour w/t ride on Monday. Monday's ride was with three other horses and before they all went out, they asked me what I thought Lucy could do in terms of distance/time. I said I didn't feel she would have any problems with a longer ride as long as it's pretty low key; i.e. mostly walking with a bit of trotting here and there. Amanda came back from the ride and said they trotted three times and Lucy was great, except for one point where she very clearly had enough and got a bit annoyed about trotting. Amanda could have gotten after her a bit, but she said she'd rather listen to the horse, and let Lucy walk for a while. After a bit of time allowing her brain to reset on a long rein at the walk, Lucy was happy to go forward again and they trotted with the group.

I've got to say I was totally impressed by the way Amanda handled this. She could have fought with Lucy and made her trot but it would have gotten ugly, I'm sure, and it wouldn't have been productive. Old Lucy looked at each request as an opportunity for a battle and I'd love if New Lucy didn't have that attitude. I was so happy that Amanda listened to Lucy and said "as long as you're going forward, I don't care how fast it is". How awesome is that?!

Upon returning from the trail ride, Amanda applied liniment to Lucy's back and then I checked her later to see if she was sore (she wasn't). I'll check her back again today and she will also have a few days off from riding as an extra precaution. She gets her weekly acupuncture treatment today and we should be in good shape! In retrospect, a 2 hour ride may have been a bit much, but as long as she's not sore from it, I will take it as a sign she's ready for more of a workload.

She has gotten so fuzzy and round, and her dapples have returned! She comes in from her paddock covered in dirt head to toe every day and cleans up all of her hay both in her stall and outside. She is very happy, not worried about anything, and I love everything about the New Lucy. Here she is this weekend: 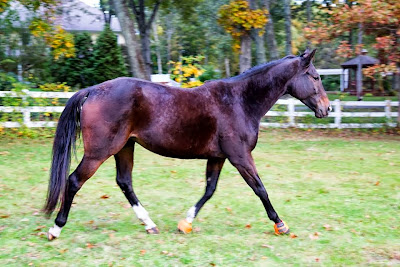