Lucy and the Fuzzball

These behaviours led me to believe that maybe she was better off as a lone ranger, safely confined to her own enclosed space, and that would be all fine and dandy if I hadn't moved her to a new barn exclusively to put her in a bigger paddock. You see, only groups of horses can go into the big paddock at my barn. If Lulu wanted a bigger space, she was going to have to learn how to play nice.

Earlier in the week, we put her out with the smallest equine on the farm: Tony the Shetland Pony. He may be small in stature, but he is mighty at heart. I thought he'd probably be perfect for Lucy because he isn't going to fight back if she tries to push him around, but he isn't going to take a beating, either. He is smart and cunning and it turned out they actually liked each other. 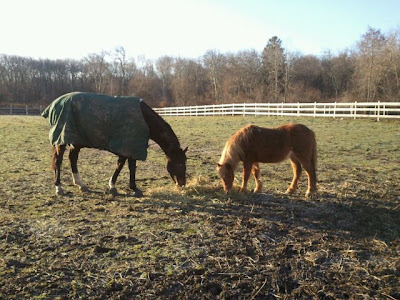 She tolerates him until he gets too close to "her" hay if she is eating it. We put out several piles of hay for the two of them, and the piles are far enough apart that they can both eat separately and not be in each others' faces. As you can see, she does occasionally share with him, though about three seconds after this photo was taken, she pinned her ears and drove him off. He wasn't fazed, though; he just trotted ten steps over to the next pile of hay.

I am really happy because this paddock is about five or six times the size of her old paddock, so there is lots of space to run and play. I caught the two of them playing one night. To a non-horsey person, it would have seemed that Lucy was about to kill Tony, but she was just kicking up her heels (and not getting anywhere near kicking Tony) and he was loving it. At one point she was in one corner of the field after romping over there from the opposite end, where Tony was still standing. They had a bit of a stare-down and then Tony suddenly dug his heels in and whisked himself over to Lucy as fast as his short pony legs could carry him. He was totally instigating the play! It was adorable.
Posted by Kate