Lucy was great today! We were late leaving the barn but we managed to get there with enough time to pull her out of the trailer, tack up, jump on, and go straight into the ring. Yeah, so much for planning! We did our three classes and I was really pleased with how she went. It was us against a younger rider and her clearly-not-green horse, a pair that then went into short stirrup and loped around the course, but whatever. That's life, I guess. Anyway we got second in all three classes but really, there was no hope of pinning above a super quiet horse who has clearly been around the block a few times. The important thing is that Lucy tried really hard, wasn't stupid, and somehow managed to hold it together despite having no warm up.

We also got some very nice compliments from the judge. She said I am on the right track and she really liked the horse :)

Here are some photos! 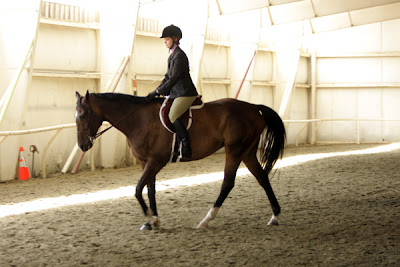 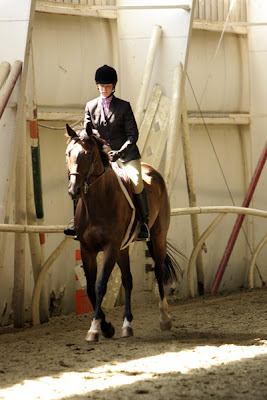 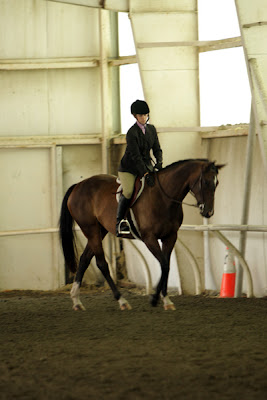 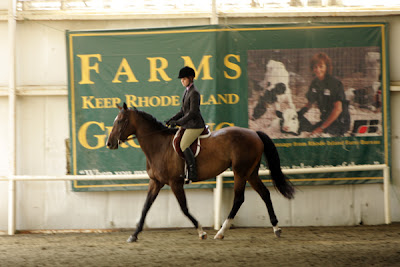 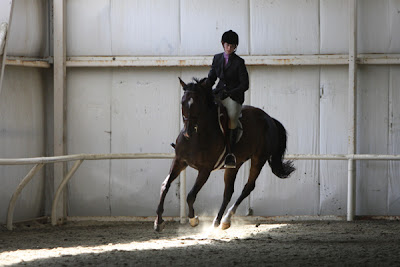 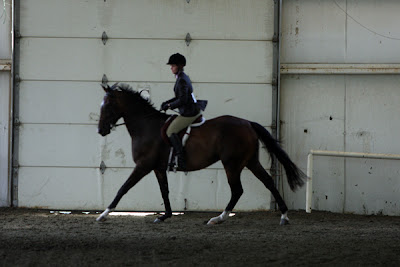 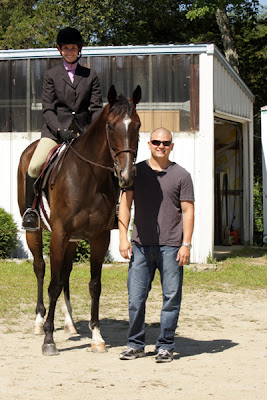 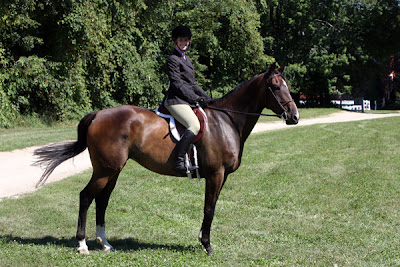 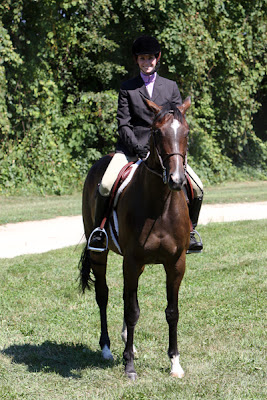 Show preparation went well this week. I work in the preparedness field professionally so it is in my nature to over-prepare for everything. I like to have everything I need arranged neatly by the door (or even better, already in the car) so that all I have to do the morning of a big event is get myself out the door and not worry about organizing things. I also packed the trailer this evening with all my tack and supplies so that I didn't have to worry about it tomorrow.

I think I did quite well this week, though. I am not even nervous or worried *yet* about the show tomorrow. Lucy has been awesome all week. I had a quick ride today and I have no complaints. After a schooling session in the indoor, we rode in the outdoor, and then I took her for a hack around the farm. The farm borders a major 2-lane highway that connects northern Rhode Island to the beaches down in the southern tip of the state, and it is very busy with all the tourists in the summer season. I decided to ride her out in the front fields that have that highway close-by and to see how she was with the traffic. The field is fenced in so if anything went wrong, she wasn't going far. Several large trucks, schoolbusses, and lots of other regular traffic flew past us at 60+ mph and she didn't blink an eye. I was so happy with her!

After the ride, I pulled her mane and then gave her a thorough head-to-tail bath. This is where the mayonnaise comes in. I have read several places lately how well mayo works as a conditioner, so I decided to give it a try. I figured that at just over $2 for a jar of it, I couldn't go wrong. I slathered it on her tail and massaged it in after shampooing the tail thoroughly.

I let it sit for about 20 minutes and then rinsed it all out. Her tail dried nicely and was soft, shiny, and very silky. I will call that a success!

One thing that almost sent me off the deep end today was when I discovered Lucy's front left foot getting a bit crumbly around the nails. Whomever said that there's no difference in the quality of white feet and black feet is an idiot. Lucy has one black foot and three white. I have never had any trouble with her black foot but I swear, those white feet will be the death of me. They crumble. They chip. They taunt me. This weather is terrible for feet, and to top it all off the flies are awful this year and bite right through the $60/gallon fly spray I have, and she stands outside all day stomping away to get the flies off her legs. I really think that does a number on her feet.

I couldn't get any farrier to come out and re-set the shoe, so we will just have to pray and think good "shoe-staying" thoughts.

I have been very busy this week with some artsy work. I went to Dover and picked up five pads: 1 white dressage pad, and four A/P pads (2 white, 1 black, and 1 green). I painted the dressage pad and the black A/P pad yesterday and was really pleased with the results: 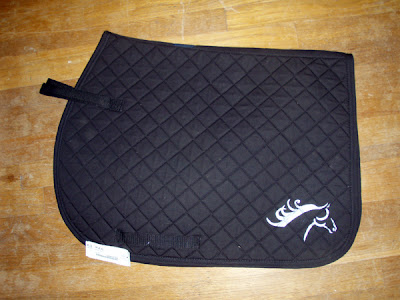 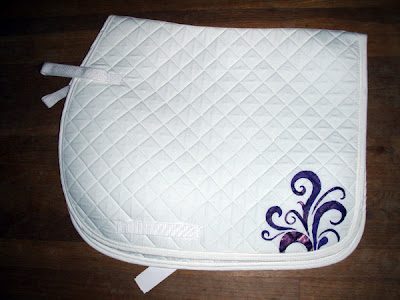 These two are ready to go if anyone is interested. I settled on $45 per pad. The dressage pad's paint is a really beautiful dark purple colour and the black pad has silver paint. I can do initials on the other side of the pad for an extra $10. I plan on painting the other pads later next week!

I also completed a commissioned drawing:

So yes, it's been a busy week!

Wish us luck for tomorrow. I will be sure to give you all a full report on how it goes!
Posted by Kate 5 comments:

The time has come: Lucy is going to her very first show on Sunday!!!!!

I am SUPER excited, especially since she has been so incredible this week. What a NICE horse she is turning out to be. Lauren reported that she had a perfect ride yesterday and was so pleased with Lucy, which is always really nice to hear. It was especially good because Lucy was inside all day yesterday so I was worried she'd be a bit nutty under saddle, but apparently she was lovely!

So anyway, the show. It's a schooling show and classes are $10 each, which will be great for my budget since I am extremely broke right now. I didn't write about this here, but last month my car needed $4500 worth of work on it. We had some help with part of the cost but it was still a rough month budget-wise, and then this week the ball bearing in one of the front wheels failed, so that needs to be replaced also.

I was almost nervous to ask Kenny what he thought of me doing a show but the wonderful thing is that we have the truck and Claire is letting me use her trailer, so we don't have to pay a shipper to take the horse to the show. Since the classes are so cheap and the show isn't rated (no association fees), it is going to be a really cheap, fun way to test how Lucy is in a show environment. He said he was excited for me to take her!

I spent a long time pouring over the divisions because I couldn't decide between regular adult w/t/c and green horse w/t. Her canter is coming along so nicely that I really want to show it off, but at the same time this show has a green horse division and I thought for the first show it might be best to play it safe and take advantage of the green horse option while we still can. It is disappointing that I won't be able to canter on her, but we have the future to canter all we want at shows. I ended up choosing green horse and I am looking forward to it.

Edited to add that I was wrong, the green horse division is w/t/c!! I am really pleased!

I think I will attempt to braid her...hopefully it comes out well. It's been a while since I braided a mane!

I also scored a cheap used pair of Tailored Sportsman breeches at a local consignment store for $30. What a deal, what a deal. I couldn't be happier about that!!

Other than that, I just cleaned all my tack on Sunday and I already have a white contoured show pad for her, so we should be good to go. I am going to stick with the Kimberwicke for this show even though we may be penalized slightly for it (placed lower than a horse in a snaffle). Hunter shows are so subjective, ugh.

I will bathe her on Saturday and make sure she's clipped but I think overall it will be a very low-stress, fun experience! I also heard the show is very small and is usually over by 1:30pm, which is awesome. Classes have typically no more than 6 horses each.

And let's not forget the best part: I know I won't have to argue with her for 45 minutes to get her in the trailer! YAY!!!

On Tuesday, the barn manager's horse got caught up in some fencing and he sustained a terrible injury. It was touch-and-go for a while. He ended up being wrapped by the vet and they'll re-check him in a few days. Please keep your fingers crossed and the horse and his owner in your thoughts because they need a lot of luck right now.
Posted by Kate 11 comments:

saddle pads - a survey of sorts

To help fund my horse addiction, I am thinking of starting up a side business of painting saddle pads. I posted a photo of some pads that I painted for the hunter pace last month. Here are a few others:

I am trying to figure out what types of designs people would like to see, or if they'd rather do fully-custom designs. I find that sometimes fully-custom is a bit scary for some people, because it's hard to envision the end result, but other people may like having the ability to make the saddle pad one-of-a-kind.

If I had a selection of pre-designed options, what kinds of designs would you like to see? I did a batch of these pads for a summer camp once for the owner to give to the camp counselors. For that order, I did a whole bunch of different designs, including flamingos, dolphins, fish, flowers, and stars. The kids loved them.

I am also wondering if customers would rather select the pad that the design is painted on, or if they wouldn't care what kind of pad it is. These were all painted on Riders International (the Dover brand) A/P pads because they are easy to wash, fairly inexpensive so that keeps costs down, and they hold up really well.

Any feedback would really help!
Posted by Kate 15 comments:

learning how to gallop

Yeah, yeah, she used to be a racehorse, so obviously she *knows* how to gallop, but this weekend I switched things up a bit and worked on teaching her to rate herself and be respectful even when I let her open up a bit. 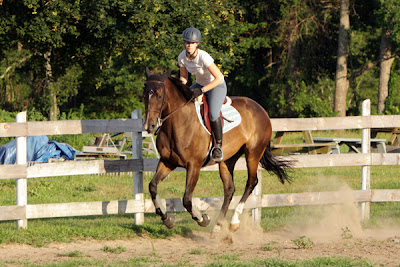 It's really the same concept we've been working on at the trot and canter for what seems like eons. She's such a smart girl that it easily transferred to the extended canter/pseudo-gallop with no problems at all. She did have one fresh moment but it was nothing that a serious half halt couldn't fix. Other than that she was very rateable and very polite. 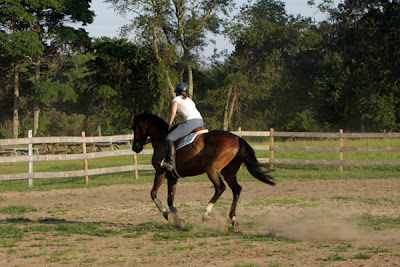 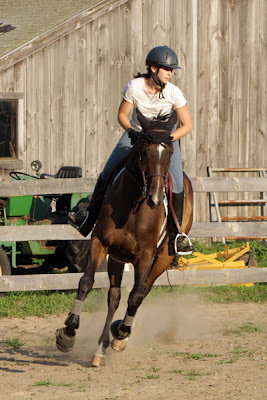 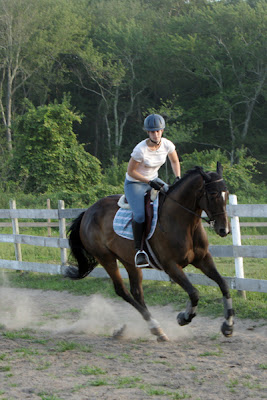 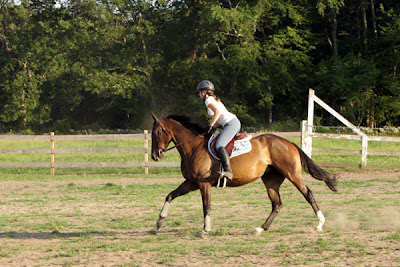 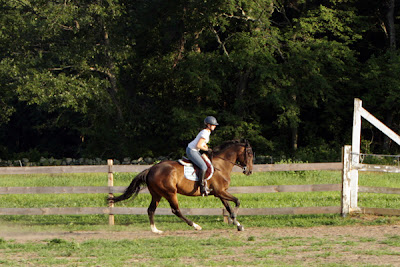 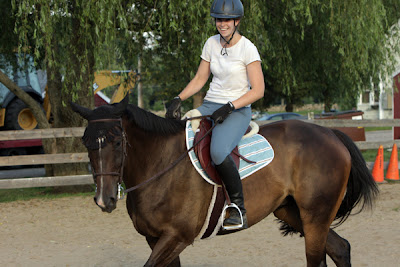 I present to you the pro pictures!