Tiny Monstrosities: The War of 2012

NEVER have I had as many issues with bugs as I'm having this year. The barn she is at backs right up to the trail system that we love so much, which happens to be quite swampy. This means there is no shortage of flying, biting insects. Short of hiring someone to stand in her paddock and karate-chop any big flies that were trying to eat her, I was out of ideas to protect her. I tried spot treatments, I tried switching fly sprays, and finally after getting to the barn one day last week and finding Lucy being tortured by a huge bomber fly, I realised that I had to get her a fly sheet.


This wouldn't be an issue for most people but I have protested the use of fly sheets for years. I have seen bugs get under them and the horse can't escape and I think Lucy would genuinely injure herself if that happened to her. Still, I figured it was worth a try. Enter this eyesore: 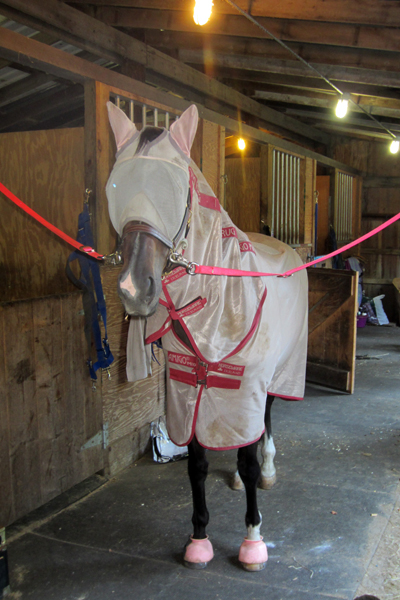 This has actually worked pretty well, except for the days when it has been super hot and very humid, because she sweats so badly under it. Today was in the mid 80's and when I went to ride, she was completely dry under it. Once it hits the 90's, though, I don't put it on.

So, ok, great. This solved the turnout problem. But what if I want to go out for a trail ride? I can't ride her with her cape on. Enter this contraption: 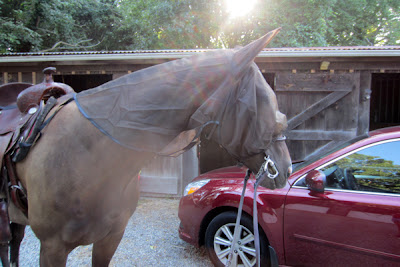 This is the Bug Out Riding Hood. Though it's not beautiful, I found out tonight that it works really, really well. It has very fine netting that she can see out of easily. It covers her head and most of her neck, including her ears. The bugs normally attack the top of her neck on either side of her mane and tonight on our trail ride, she didn't act like they were bothering her at all. They were landing on her in droves and trying to bite, but beside the occasional ear flick, she seemed very content!


We trail rode all through the woods, past the swampy area, around the lake, and through tall grass. She was fine the entire time. Cairo, on the other hand, got chewed up pretty badly. Poor thing :(

So I will call this a success!


On a side note, thank you for all the sweet comments about Cassie. We are taking it one day at a time and making sure she is comfortable. It seems our idea of what could happen if one of the tumors burst wasn't quite accurate according to a second opinion so we may be able to have more time with her. It kills me to not be home right now, but I know my parents are giving her all my love.
Posted by Kate