so many cute boys to choose from

The biggest news on the Lucy front is that I groomed her this week. I kid you not, life with a laid up horse is really, really dull. She is filthy all the time. I've given her a few baths and started out grooming her daily but she'd go back out into her paddock and roll immediately, looking at me defiantly like "you just wasted alllll that time". There's no harm in a dirty horse so that's cool, Lucy, you can just look like a ragamuffin. 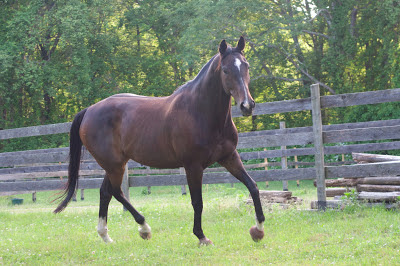 Her re-scan on July 1 is getting closer and I am excited and a bit scared to see how her back looks. She usually rests her right hind leg, but as time has progressed and she's had these three-ish months off, she's been resting her left hind leg, also. I've also caught her voluntarily picking up her right lead canter in the paddock, which to me is very encouraging.

Lauren and her horse Charlie joined our little barn family yesterday, after some extensive and bizarre drama at her farm between the barn owner and the barn manager. She chose to get out before it got really messy, no doubt a very wise choice. Maddy and I went and picked Charlie up yesterday and helped Lauren get him settled in. Lucy, of course, was allllll excited about the new arrival. She is such a hussy, but I think her true love is still Brantley.

Maddy and I chose to put Lucy and Brantley out together and opened up the divider between two paddocks, so they can share the bigger space. They are so happy in there. As long as Lucy doesn't become too attached to him to leave, this can be a long-term arrangement. The last thing I want to deal with is a herd bound horse, which is dangerous and not fun for anyone.
Posted by Kate