On Friday it was drizzling, chilly, and feeling very much like fall in New England. There were periods of heavy rain so the horses stayed in. When I got to the barn after work, I put Lucy out in one of the big paddocks so she could stretch her legs, since there was a lull in the rain. I figured she'd be fine out there for half an hour while I did stalls, and then I planned on bringing her in and riding.

I went out to get her half an hour later and she was covered in thick, wet mud from nose to tail. UGH.

Saturday was sunny and beautiful. I had to photograph a wedding in the afternoon, but I was able to sneak in a quick hack in the morning. I always carry my cell phone with me and it rang as we were walking down the trails. I answered it as Lucy carried on walking on the buckle. There I was, yakking away, when I noticed two good-sized young bucks in the woods about 30 feet away from us. Lucy looked over at them and I prepared to get tossed. I quickly said to my friend on the phone, "ok gotta go!" and hung up, and braced myself. She looked at them, let out a huge sigh, and turned her attention to the trail. Then the bucks took off through the forest parallel to the trail, and ran across the trail behind the horses. She didn't even flinch!

On Sunday, Lauren and I went on a really long, fun hack together. She rode Lucy and I rode my barn owner's little Arab mare, Bella. I have ridden Bella in the ring a few times and she has always been well-behaved, but no one knew how she'd do on the trail. She turned out to be a total pro. She was happy to lead, or she was happy to follow! She wasn't impressed by a big puddle we encountered but she just danced around it. We had a trot and a canter alongside Lucy, and both girls behaved beautifully. We walked through a big neighbourhood, met some kids, saw some kids on bikes and skateboards, and had dogs running at us and barking, and neither horse had an issue. We went back to the barn and had some fun galloping around one of the fields: 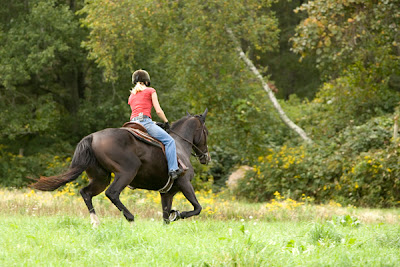 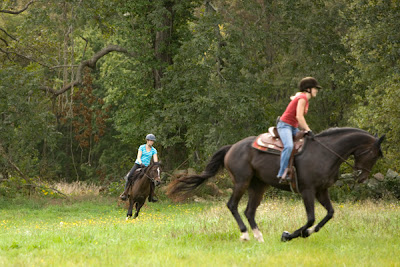 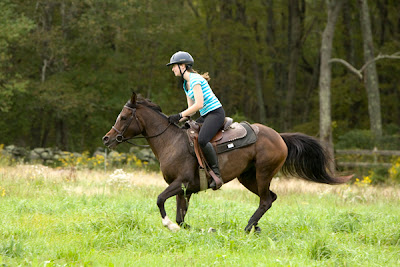 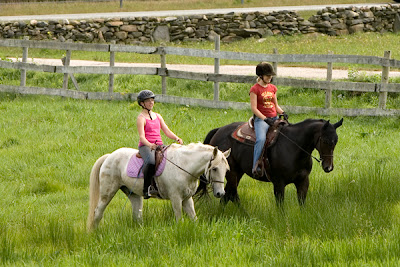 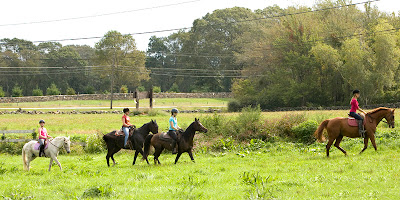 In the afternoon, I headed back to Suffolk Downs with my friend whom we went horse shopping for last weekend. She had decided to vet out Prairie Melody, the beautiful bay mare with the great personality and quiet disposition. She set the PPE up for Sunday afternoon and then on Saturday morning, the trainer called her and said the owner had changed his mind and didn't want to sell her, because she had been training well all week. I was like, seriously?! They're going to run her until she bows a tendon or something, and then her chances of finding a great home will be much slimmer. She's already 6! My friend was really upset because she had fallen in love with this mare, but she bravely decided to go to the track and have another look to see what else was available.

We had gotten a tip from a friend who works at the track that there was a lovely gelding available. His name is Montana Country. He's also 6. He was a bit smaller than Prairie Melody, but my friend is very petite so she had originally wanted a smaller horse anyway. He was super sweet. He came out of his stall without a chain over his nose and he trotted like a hunter, pointing his toes and poking his nose out as he stretched through his back. REALLY a nice horse. The problem is that he had chips in his knees as a 2yo, and the owner didn't have them removed on the vets advice. Instead, they gave the horse 6 months of rest and he has raced sound ever since. I personally feel that if the horse has raced just fine for 4 years, his knees are probably not an issue, but I still advised my friend to get x-rays in case there's any arthritis starting up in there. I hope he vets sound, though!

We saw a few other REALLY nice horses. One was a 7yo mare who was broke to ride as a hunter, and then when she was 6, the owner decided to race her. She has raced just a handful of times and isn't showing any talent, so the owner wants to sell her, but she is totally sound, no issues, and she is a true black to boot. She would be super easy to retrain since she already has a solid foundation under saddle. I would bet that she'll stay sound for a long time, since her body wasn't put under racing stress until she was 6 and fully developed. The owner is asking $3500 for her but according to the trainer, she's very negotiable. If you're in this area and looking for a horse, let me know and I will give you the trainer's info.

Another nice horse that we saw was a black gelding with really cute markings. He is also sound, and they're asking $2k for him and he has a lovely balanced build, and moves like a hunter. Really really cute.
Posted by Kate