I have been working my heinie off at both my regular job and then a bunch of small side jobs. After starting work at 6am on Friday I went straight to Dover to work at their annual tent sale. I was there until 8:30, so that was a long day. I worked another ten hours at Dover on Saturday. It was very hot out in that tent in all its sweaty sauna glory, but I enjoyed helping customers. I always like shopping vicariously through people!

With my earnings from working the tent sale, I bought something I've been pining for for a long time: a Rambo Micklem Competition bridle. It is sooo pretty. Now, I worked at the Dover store when it first opened, and I was part of the crew that put the store together initially. I spent about a week putting bridles together, so I know how all the pieces fit! But a Micklem is a bit...erm...different, and I swear I felt like I had never put a bridle together when I first saw all the pieces of this thing. Luckily, Maddy helped me, and we got it assembled. I put it on Lucy to see how it fits her (it fits perfectly) and she was so confused. I didn't put a saddle on her, of course, and she hasn't been tacked up in a very long time, so she was like, "What the devil is going on here? I thought I was retired!" Since she's been hurt, I haven't bought anything fun, only grain and hay! It has sucked! Boy did I miss shopping for beautiful tack, although I am much less broke than I've been for a long time! 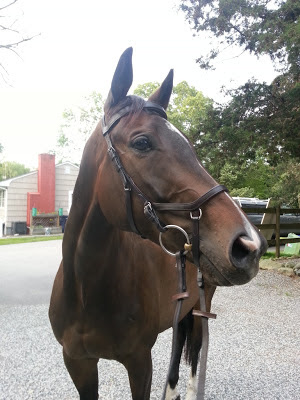 On Sunday, I helped my hay farmer bale three fields of hay. Maddy was there too, and she told me I'd appreciate the cost of hay a lot more after that. Um, YEAH....that was a lot of work!! $7 a bale doesn't sound so bad now! My responsibilities on Sunday were to throw the hay that had just come in from the field onto the hay elevator so that it could be stacked in the farmer's hay barn. Then I went out and picked weeds out from the next field that we were going to bale. There were three of us picking out weeds and we got a lot of them! Evidently, the weeds, which have a very thick stalk, do not dry out as quickly as the grass does, so one weed can cause a whole bale to go bad. 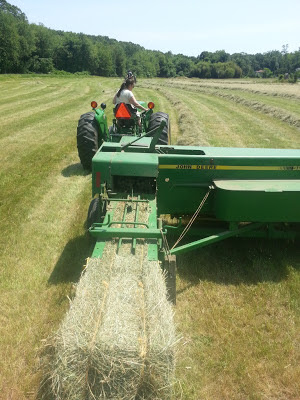 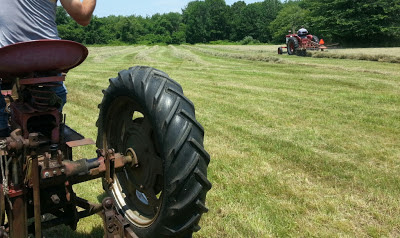 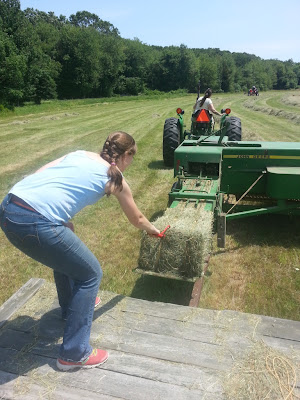 I tried to keep up with drinking enough water but I started to feel very sick after about 4 hours of working out in the sun. I have such a low tolerance for heat and sun, it's ridiculous! I had fun, though, and learned a lot. In exchange for helping out, I got a very good deal on some hay that we pulled fresh out of the fields and brought to the barn. Lucy has been pretty wasteful with her hay in her stall lately but she is cleaning up every spare morsel of this stuff. It has made our hay barn smell amazing. If I were a horse, I'd eat it all, too!

Lauren is away this week and Maddy and I are taking care of Charlie for her. She also said we could ride if we wanted to, so yesterday I rode after work. He is very different to ride compared to Lucy. He is so long and lanky, but he was a very good boy. He had one little spook and it was basically, "oo that's scary! very scary! oo I will just do a little shuffle and then stop! ok, I'm over it!" and that was it. He has had a rearing issue in the past so I was paying attention to his front end most of all, and making sure he was going forward. At one point he started flipping his head and got a little light in the front end, but his front feet never left the ground, I just turned his head toward the inside of the ring and booted him forward. He snapped right out of it, thank goodness! After that, each time he got a little sluggish and started acting distracted, I made sure to urge him forward right away.


The other thing I worked on was asking him to stand by the mounting block. Lauren had told me he likes to wander off when you're halfway on, and he tried that on me the first time I went to get on him. He found his rear end parked right back by the mounting block and we tried again. This time he just took one step sideways, so again I got off and moved him back over. The third time he was almost perfect. My mission for this week is to work on that so maybe Lauren can come home to a horse that will stand all day by the mounting block!

Lucy has been doing well. I did a horrible chop-shop job cutting her mane, and I finally mowed down the mohawk bridle path she had going on, so she looks halfway civilized. Her front feet are falling apart, probably from stomping at flies, so I will need to have her feet done already, only 4 weeks into the cycle. It's only going to get worse, too; those huge "B52" flies are starting to come out and those things are awful. They actually take chunks out of the horses. Poor things :(

Here's a photo of Lucy being super sweet with one of the neighbour's children: 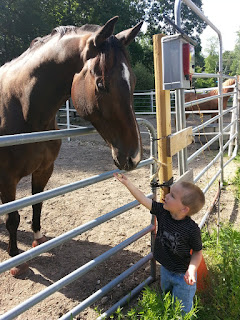 Last but not least, I will leave you with a kickass video that's been circulating around over the past few days. If this isn't heart, I don't know what is: