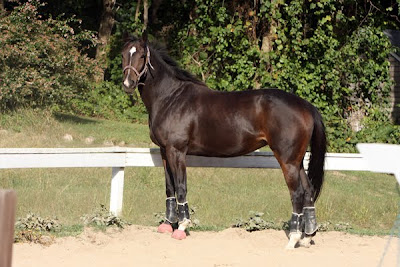 I need to gush a bit about Lulu because she was stellar today. She was really good from the start, so good that I didn't really spend a lot of time making her go through her paces. I put down a few jumps to cross rails and off we went. She got really fast over the first line, and even though I was asking her to woah, she grabbed the bit and ran. I was like, ok, you want to play it that way? So we went through it again and she had to halt between the two jumps. After that she was much easier to get to back off, and coming across the diagonal line to a single crossrail I half halted, felt her ease up, released, and she immediately softened around my leg and it was the most perfect little jump we've ever done. We ended it at that and she got tonnes of praise and an apple :) She was so sweet, she knew she had done really well and she just wanted to be snuggled. She's awesome. This was the first time we've jumped in a while; I've been concentrating so much on the flat stuff and I could sense she was getting bored. I'm glad we switched it up a bit.
Posted by Kate