Ya know, I was really starting to enjoy my daily horsey routine again. It involved no cleansing of wounds, no wrapping, no buting or Ace-ing or any vet care of any kind! I got to see my lovely horse trot around on the lunge line and then I got to put her away in her stall and feed her dinner. It was peaceful, easy, and I was happy to be working toward a goal with her. 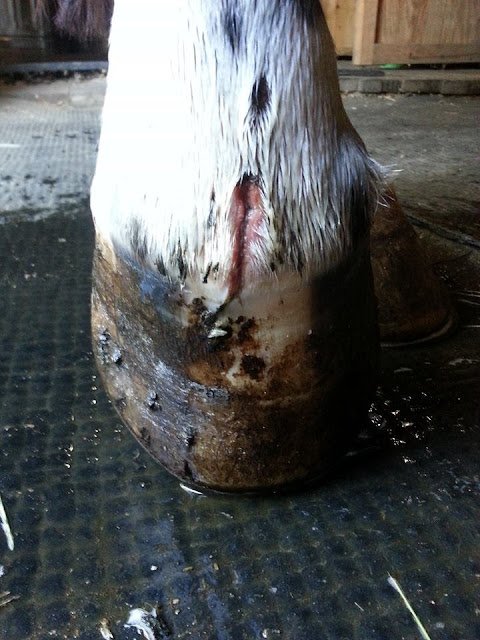 She was running to get away from one of the huge "bomber" flies. To her credit, those things HURT when they bite. They have knife-like jaws and take a chunk out of the flesh that then bleeds and swells to the size of a marble. So I imagine that in her mind, this was a reasonable response. In my mind, though, I was seeing her slip and fall and hurt her back again. Luckily, that did not happen but by the time I got out there she had kicked herself somehow and sustained this lovely cut down the lower half of her pastern into her hoof. She actually damaged the hoof wall and there is a little slice in her foot. Now, a hoof takes about a year to totally grow out so I will get to look at the evidence of this incident for the next 12 months, give or take.

She wasn't lame at first and then I cleaned it really well (aka scrubbed it) and after that, she was like, OW! OW! OW! each time she stepped on that foot. This all happened on Monday morning, the morning after my friend's horse was euthanized, and honestly I did not have the energy to deal with it. I gave her some bute, cleaned it up real well, and called it a day.

Yesterday, she looked much better and didn't seem bothered by it, but given its location I started to feel like maybe it deserved a bit more worry from me, so I sent my vet a photo of it. The vet called and basically scared the crap out of me talking about infection in the coffin bone, referring us to Tuft's, etc. I kept saying, but she isn't lame on it! So the vet gave me a list of signs to watch out for and said to call back if she seems to take a turn for the worst. In the mean time, I have to clean it, doctor it up with some Neosporin, and wrap it each day.

OH HEY! How fun. I had just put away all of my vet stuff that was hanging out in the barn aisle and here I was dragging it all back out again. I guess I jinxed myself!
Posted by Kate