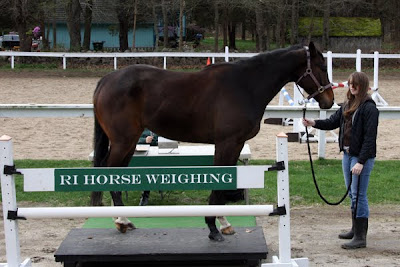 Lucy has gained 42 lbs since her last weighing, and the scale said that she now weighs 1053lbs! I was hoping for close to 1075 but I'll take it! I think that ~14/lbs a month is a reasonable rate of weight gain for her, especially now when I'm riding almost every day.

So to recap, she was 1020 the day I bought her. She weighed 1011 on 1/23/10. At that point she looked better but I was concerned that she had lost weight, so I revamped her feeding program, putting her on a weight supplement and the alfalfa cubes, and also started the Black Oil Sunflower Seeds. It's coming together!

Today I had a great ride. We galloped. It's funny; I've spent all this time teaching her how to be a horse and not a machine, and yet today as soon as I crouched over her and let the very thought of speed go through my mind, she was instantly a rocket machine. I felt the power come from her hind feet, through her hocks and hips, flying over her back and zipping around her shoulders, blasting up her neck and bursting out of her nostrils in quick steamy breaths. It was thrilling and absolutely terrifying all at once. It's like a rollercoaster ride: as you see the world flip upside down right next to you and fly past you at a rate of speed you know is not natural, you're wondering when you're going to die at the same time as thinking "DAMN this is awesome!".

Well thankfully the world wasn't doing somersaults beside me because that would most likely mean I wasn't attached to the saddle anymore, but it was whizzing past my ears, through the vents in my helmet, and whipping my hair into my face despite the fact that I thought I had tied it tightly in a ponytail at the nape of my neck. It was like the loudest whisper I've ever heard, the blur of field and sky and tree all dancing in a whirlwind to the beat of her hooves. I fully believed that if all of a sudden the ground she was running on dropped out beneath her and all that was left was open sky, we'd continue down this stretch as if nothing had happened. My horse had wings. I could feel her coiled beneath me like a spring that's been locked up and planning its freedom. I can't turn that machine part of her brain off, though she's done a nice honest job of trying to push it aside while I school her in circles and ask for things like relaxation and lightness in the bridle. Those qualities were not in her vocabulary today and she was so intent on her job, on covering as much ground per stride as physically possible, that for a moment I wondered if she had instantly reverted back to being a racehorse and all my hard work over the past few months was lost. The end of the field fast approached, though, and with a bit of persuasion and a toss of her head, she came back down to earth, seemingly annoyed that her little thrill ride had to end.

And still through all of this, I didn't fully let her go. I held back, petrified that if I gave her all of her freedom, we'd never stop. It's not even that big of a field, especially when your horse seems to cover 100 feet with each footfall.

So that was my ride :)
Posted by Kate