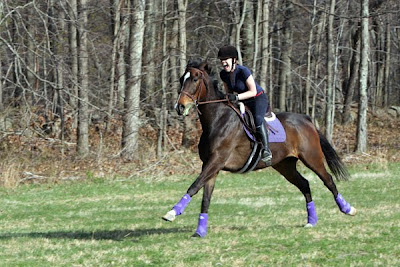 This is my friend Cinnamon riding Lucy in the field this weekend. I'd love to say that it ended well, but shortly after this photo was taken, Cinnamon went through the motions to ask Lucy to slow down/stop, and discovered that she had no brakes. Lucy ran Cinnamon right into the woods, Cinnamon fell off, and then Lucy took off at lightening speed and ran out of the field, down the road, and back to the barn.

Needless to say Lucy will NOT be running again until she learns how to stop.

Meanwhile I had to check to make sure Cinnamon wasn't injured (luckily she wasn't) and then run after Lucy. I had my SLR camera with me and it weighs so much with the big lens on it that I couldn't run with it, and I just left it in the field. I figured no one ever goes there and it would be safe until I returned to get it. Lucy is much faster than me and I am not in shape to be sprinting after her down the road so she was long gone by the time I even got out of the field. The most comical part was that the road was lined with residents who had been working in their yards, pointing to where they saw the horse run. I felt like I was in some sort of parade, running down the middle of the street with people on both sides staring at me.

I ran probably 1/4 mile before someone asked if I wanted a ride. Normally I don't jump in strangers cars but my lungs were on FIRE so I choked out "yes please!" and got in the car. Cinnamon wasn't far behind me, and she got in the car too. Then the lady drove us the rest of the way to the barn, where my lovely mare was waiting for us in the driveway, probably wondering where her dinner was.

At that point it was too late to discipline her for taking off with Cinnamon/dumping her into the woods/running away because the fact of the matter was that she could have very well run past the farm and ended up someplace near the highway, but she was smart enough to run home.

I checked her over and she seemed fine. Cinnamon was feeling a bit sore but nothing was broken. I was absolutely fried because I think a situation like that is one of the most stressful things to go through.

I cooled Lucy out and put her away, after applying a brace to her legs because I'm sure she'll be sore after galloping on the pavement. As Cinnamon and I were about to leave, someone drove up the driveway and got out of the car holding my $4000 camera and $700 video camera, asking if it was mine. "We saw you walking to the field holding the camera and then we saw you running from the field with no camera so we went to get it for you!" I thought that was just the nicest thing ever. I would have been devastated to lose my camera but these nice people brought it back for me.

So all in all, it was an extremely stressful experience but the good news is that the rider and the horse were both fine, albeit sore and winded, and I got some great photos :)
Posted by Kate