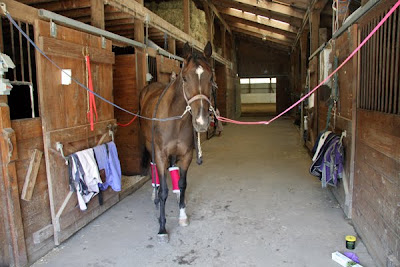 Lucy got herself in quite a pickle today. She was flirting with one of the geldings in the next paddock over from hers, and then decided she'd had enough. She kicked out at him through the fence and ended up getting her left hind leg stuck over the middle board of the fence. It's that plastic flexible PVC fencing and it will NOT break, no matter what. She could barely stand on her RH so she was more or less hanging from her LH, which was hooked over the fence.

Luckily I was down at the paddocks filling water buckets so I was witness to this entire situation and was able to intervene immediately. She started thrashing around, trying to get unhooked from the fence, so I ran over to her and yelled for help. She calmed right down as soon as I was by her side, and stood absolutely still. One of the other boarders came down to help me but the gelding was really being a huge pain through all of this, and went right up to Lucy with her leg still up over the fence and tried to sniff her rear end. Of course this upset her again and she gave two humongous bucks and got herself free. I jumped out of the way as soon as she started bucking again because the last thing I needed was a hoof to any part of my body!

It was traumatic to watch and I burst into tears as soon as she was free. What a stupid horse. This is the second time she's done this. She has been very lucky not to injure herself badly; everything is mostly superficial as it was the first time, and she'll probably be sore but she was not lame after it happened.

She got a gram of bute with dinner and I put standing wraps on her hind legs for the night. I hope she feels ok tomorrow. I was really looking forward to some nice weekend rides. She's been going great lately and I would be disappointed not to ride for a few days. 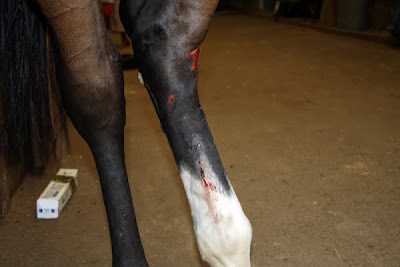 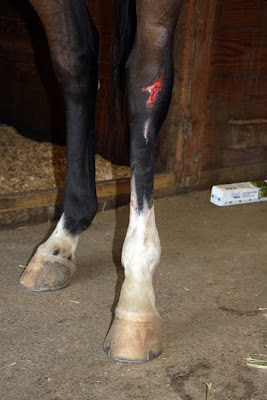 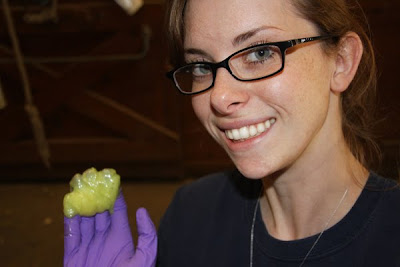 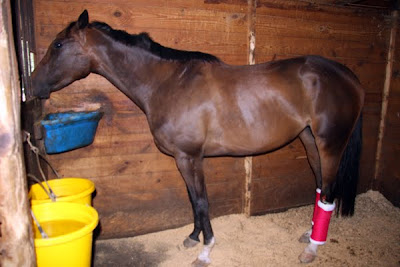 Eating her dinner.
Posted by Kate