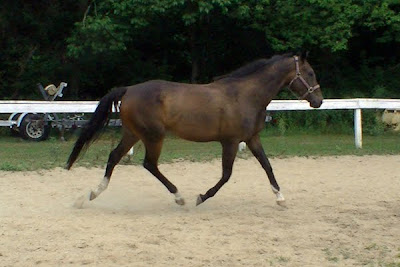 (Excuse the poor quality; these are video stills.)

I am in the process of switching Lucy's grain to Poulin from Triple Crown. I don't dislike TC (she's on the Complete, a 10% fat/11% protein grain) but I have to feed an awful lot of it, just about ten pounds a day. She goes through a bag of it in about five days. At $18/bag, that's a lot of cash each month on grain! Plus, on top of that, she gets all the add-ons: hay stretcher in the AM, soaked alfalfa cubes in the PM, 1 cup of canola oil a day, 15 grams of ProBiotics, 1 scoop of Weight Builder, two scoops of electrolytes, and 1 cup of sunflower seeds. It's ridiculous! I spend more time preparing her dinner than mine (just kidding, but sometimes it sure feels that way!).

The new Poulin grain is a 12% fat/12% protein pelleted feed and it's a few dollars a bag cheaper than the TC. I am hoping that the higher fat content will allow me to feed less of it than I have to of the TC. There are two bonuses to feeding less: obviously, it will be less stress on my wallet, which is always nice, but also it's not GOOD for her to be stuffed with so much grain. Her stomach can only hold about 5lbs of grain, which is a new fun fact that I learned from the Poulin rep when I called him this week. He said with the amount I'm feeding her, she most likely isn't even getting some of it because it's more than her stomach can hold, which means a portion of the grain is being pushed down her digestive tract before her stomach can break it down. He had a lot of good information for me, including the recommendation to feed the soaked alfalfa cubes separately from the PM grain before I ride her in the afternoons, because there are a few new studies that show having a bit of alfalfa in the stomach prevents any stomach acid from splashing at the top of the stomach, which can exacerbate any ulcers she may have.

Speaking of ulcers, the reality is she probably has them, as most OTTB's do. I've really procrastinated getting her scoped, but this week I decided I needed to just get it over with before her insurance runs out, because I'm not sure if I'll be able to afford to re-insure her again next year. The insurance company will reimburse me for the $1500 vet bill that I'll get to have her tubed and put on a months regiment of GastroGard (ulcer medication, $30/DAY) but I have to pay the vet up front. With my wedding less than a month away, we simply do not have $1500 laying around to pay that bill with, so it will have to wait until after we get married.

Anyway, back to the switching of the grains: I am doing it very slowly but luckily she gobbles up the new stuff. It helps to have a highly food motivated horse, I suppose. I have wanted to switch her feed for a long time but it was a matter of waiting til she was in good enough condition that dropping a few pounds (should the switch not be the right thing to do) wouldn't make her look like a rescue case again, and also I had to find the right feed to go to. I think the additional 2% fat in the new feed will really help. We'll see!
Posted by Kate