Lucy gets treated to a spa week

Lu has been working very hard, and she's been an excellent sport about everything. I decided it was time to treat her to a bit of primping. :)

She got her feet done yesterday, which is a normal part of horse ownership, as it happens every six weeks. But today, she was adjusted by Dr. Steven Katz, a local chiropractor who is great with the horses, even sensitive flowers like Lucy. He also did a bit of muscle release/massage with her, and checked the fit of my saddle and Lauren's saddle. I haven't had my saddle's fit checked since I bought it last November, so it was waaaay overdue. The sorest points he found on her were her SI/hip area and her neck. Her SI joint has always been a bad spot for her, which probably stems from her time as a racehorse. Going from zero to forty miles per hour in a few strides puts a lot of stress on a horses hind end and after doing it for two years while still so young, the damage doesn't just disappear magically.

Luckily for Lucy, Dr. Katz knows his stuff and he isn't put off by sensitive mares (ahem) and in a short amount of time, he had her feeling much better. He got some great adjustments in her neck and was able to release a lot of tension in her hind end. I always love watching him work with his patients because of the way he gets the horse to use their own weight to adjust themselves.

Next Monday, she has an appointment to get her teeth done. She is still young enough to need to be done every six months. Last time she was seen by the dentist, she had some sharp points and he had to remove some caps. We'll see what he says about her this time around!

Between the pedicure, body work, and dentist visit, she should be feeling quite wonderful! She deserves it, though :)

Lauren also had a great ride on Sunday. She and I went out on a trail ride together. It was supposed to be a "snow" ride but by the time we actually got out on the trails, the snow was almost all gone! We had a good time anyway, and after we got back to the barn I put the horse I rode (my little project Appy -- I really need to update about him, too) away and she had a bit of fun with Lu out in the field. It turned into somewhat of a Rambo commercial: 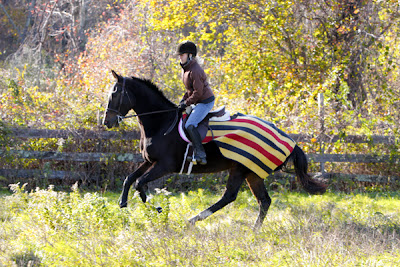 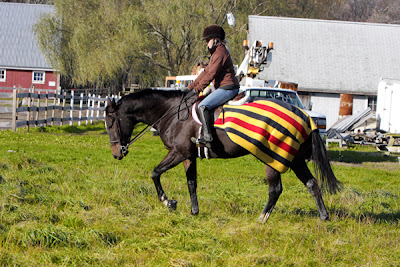 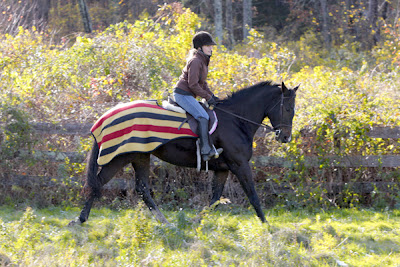 I also need to say a HUGE thank you to anyone who voted for me in the Tredstep Facebook contest. I won! Thank you for your support!
Posted by Kate