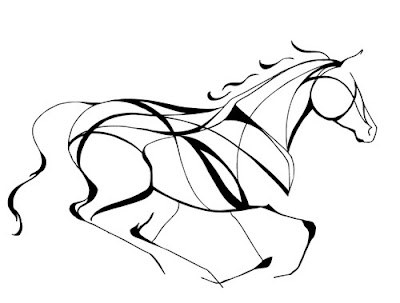 Forward
Lucy had a ton of excess energy today, moreso than usual. She spent about twenty-five minutes romping (and I mean romping!) in the indoor and it took me about twenty-four of those minutes to decide that I was actually going to get on her. She had a lot of fun, squealing and bucking and running around. At one point she went to inspect the door to the arena, where a fellow boarder was standing. Since she was so rowdy he did not want her to get to close, in case she spun around and kicked, so he waved his hand at her and said "get away!". I think she was a little bit offended because she tucked her head in and jumped literally five feet up into the air, and then took off at full tilt around the ring.

So I had this mental image of her tearing around, her haunches spring-loaded for action and her ears pricked foward, looking for the best route. I love her playfulness and I hope she never loses that, even when she gets older. I also had been thinking a lot about forward energy, and how the energy for a horse comes from behind and goes in a circular motion, making its way through the horses back, shoulder, up the neck, through the jaw and then back towards the haunches again. I drew this tonight while the image was fresh in my mind and now I have to figure out how I'm going to finish it.

In the mean time, enjoy the work-in-progress, a memento of twenty-five minutes of orchestrated chaos.
Posted by Kate