"Did you get it?!", and Lucy channels her inner Houdini 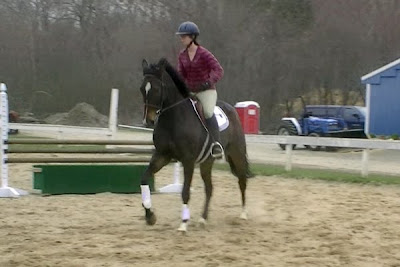 Yesterday was quite comical, or at least Lucy thought so!

Our ride was very decent, with one hiccup somewhere in the middle, but I'm going to blame the mayflies for that (and on a related note, they're called MAYflies, not APRILflies. Yet it's April, and they're here).

Yes the bugs were bad, and so was I because I neglected to spray my horse with fly spray. She handled everything well but had a little bronco session, which I sat and then triumphantly asked my friend who was videoing if she got it on tape! Ha! Now that's an equestrian for you. Even an embarrassing fall is not *that* bad as long as it is caught on tape! 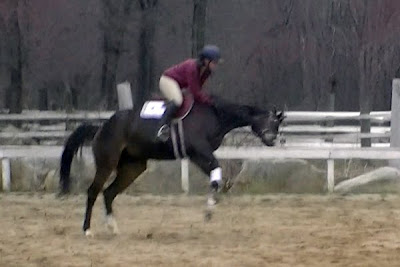 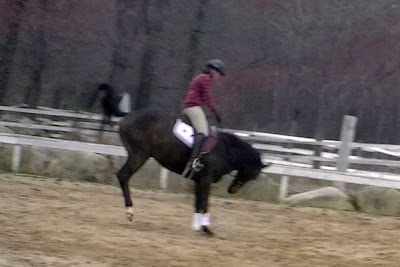 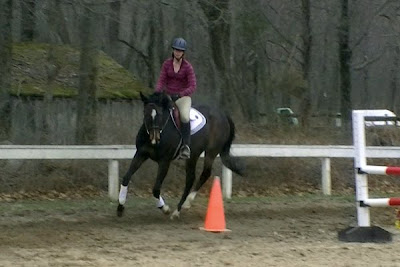 After the ride, I cooled her out and put her in her stall and fed her. While she was eating I decided to go in and fly spray her (hey, better late than never...), which was all fine and dandy except I left her stall door open a smidgen and was too lazy to put the stall guard up, so what did the princess do?! She ESCAPED! Before I could get in front of her to block the door, she squeezed herself out into the barn aisle, took a look around and decided she felt like going outside, and walked out of the barn and made a beeline for the nice rich spring grass. Ok, I don't blame her for that, but THEN she refused to let me catch her! And it wasn't even like she was running around; I think the most she did was a little jog, but she just moved evasively enough that I couldn't manage to catch the little bugger. My friend Claire helped me and another boarder went and stood in the middle of the barn driveway in case she decided to go for a neighbourhood tour** and after about five minutes and lots of candy wrapper crinkling, she finally gave in and with a sigh let me put the halter on. She definitely had a twinkle in her eye while she was enjoying her freedom out on the lawn, though. You can bet I put that stall guard up today while I was fussing with her in her stall after our ride!

**She is already known as "that crazy horse" around the neighbourhood from that time she dumped me on the trail ride and galloped full-speed down the middle of the road all the way back to the barn. I certainly did not need her to be making the rounds on the well-manicured lawns of the neighbours eating their springtime flowers!

Pretty entertaining, if you ask me.

Today's ride was quick and relaxed, and she was lovely, even though the wind was kicking up some major debris that was hitting the side of the indoor. I think I was spooked more than the horse!

Ulcer Update: Lu's GastroGard treatment was scheduled to conclude on Friday, with the last of the three weeks of tubes. I got to talking with my friend from the barn who by this point knows Lucy pretty well, and we decided it would be worth calling the vet to see if he thinks that maybe one more week might do her some good. I called him today, gave him the run-down of her progress, noted some of the issues that seem to be lingering, and he said he agreed that an additional week couldn't hurt. So I will be picking up another box of GastroGard tomorrow and that will make her treatment the full recommended regiment of four weeks. I am happy about this and I think this will ensure that her gastric health will be 100% solidified before we stop the treatment.

I am LOVING the contest entries so far - keep them coming!! Don't forget to link me to any promotions you do in your blog so I can give you an extra chance in the contest! Details are in this post.
Posted by Kate