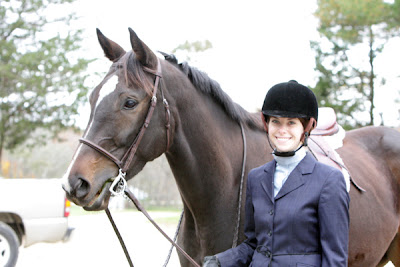 The show today went better than I could have expected. By some miracle, Dreamer stayed white overnight. He wore a sheet last night but I seem to recall from my days showing him that he would always manage to get stained somewhere, even on occasion UNDER the sheet. Last night he must have been feeling cooperative because we pulled him out of his stall this morning and I almost had to put sunglasses on, he was so sparkly.

Then we took the sheet off of him and while we loaded Lucy, we put him in his stall for all of two minutes and the little devil rolled in the dirty stall, so he had to have a vigorous cleaning session with Miracle Groom and an old towel to get him clean again.

C rode Dreamer beautifully. This was her very first show and she was nervous but excited. I spent a long time with her yesterday practicing in the ring at the barn as if we were at a show, so I'd stand in the middle, "call" the class into order, and go through the walking and trotting in each direction. We practiced how to switch direction, how to pass another horse, and how to stand when the judge asked people to come into the middle of the ring at the end of the class. We reviewed what the differences were between "pleasure", "equitation", and "command". She is really smart and kept her wits about her, and concentrated on accomplishing her goals, which were very specific, instead of trying to "ace" the entire thing. She came away with all firsts and seconds and a championship ribbon! Dreamer wasn't perfect for her; he gave her some trouble by the gate, trying to get out of the ring and that sort of thing. She gave him a smack with the crop and didn't make anything but forward and straight an option for him. He didn't give her any nonsense after that! I was so proud of her.

Lucy warmed up so well for her classes but once the classes started, she was more excited than I had hoped she'd be. The show was so small that I entered the Open division because no one else showed up for the Green division and I didn't want to be the only one in the class. There was only one other girl in the Open division. Our first class was hunter pleasure, which we obviously flunked because she's neither a hunter nor very pleasurable to ride lol. Oh well, she tried very hard. The second class was equitation and I won! The third class was command, which we also won (and it just occured to me that we picked up the wrong ribbon for that class at the end of the day...oh well). I was really happy that we won that class because we were asked to do things like walk/canter transitions, backing up, changes of direction at the canter, etc. She ACED it. The fourth class was the Championship class, which we got second in because she blew the left lead (picked up the right lead, got pissy, threw a tantrum/flying change leap fest, and then picked up the left lead...RIGHT in front of the judge. Argh. Oh well. She was much better than the first show we went to over the summer. Then we did trail, which we won out of everyone at the show. I think that's pretty hilarious and awesome.

The tall boots looked great and I was able to at least put my heel down, yay :).

The biggest stress source of the day was having a student with me and having to get her and her horse ready on top of me and my horse, which was a first for me. I think I handled it well. Both of us were on time for our classes, and both horses got a warm-up. 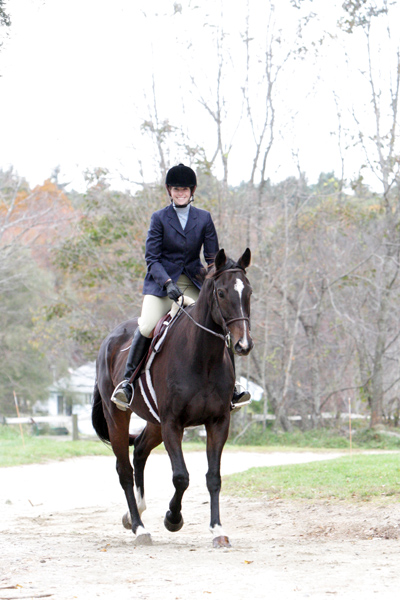 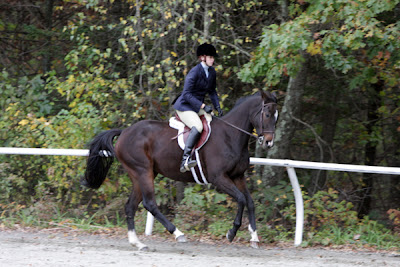 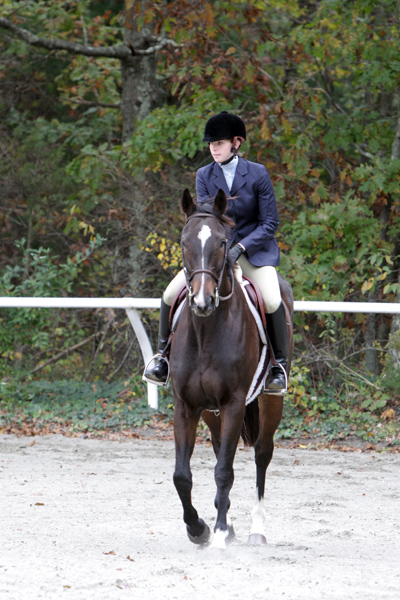 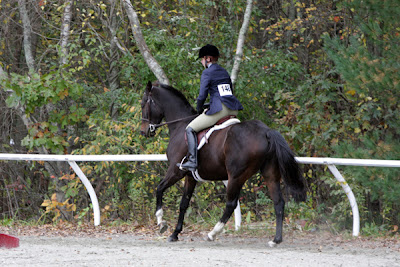 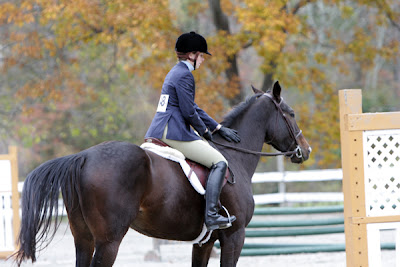 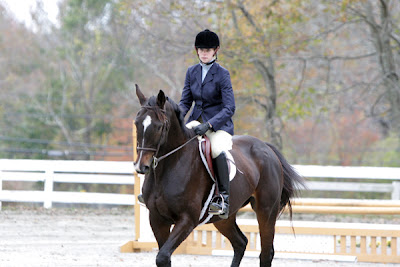 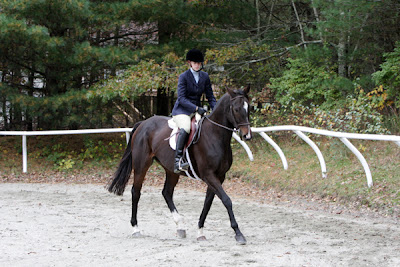 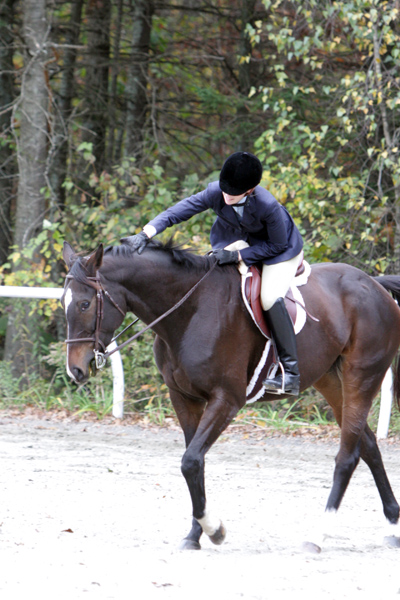 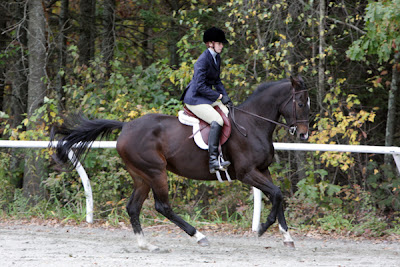 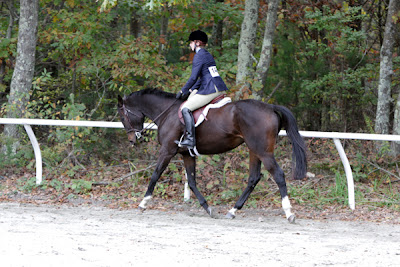 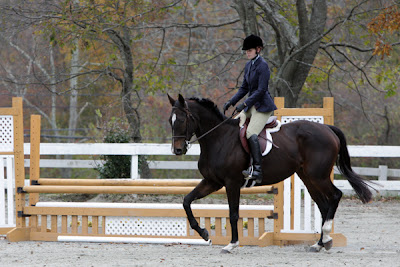 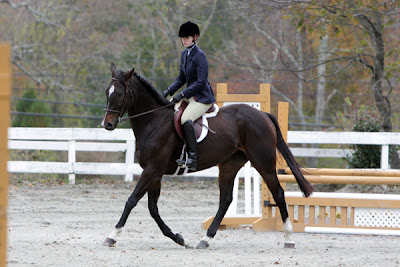 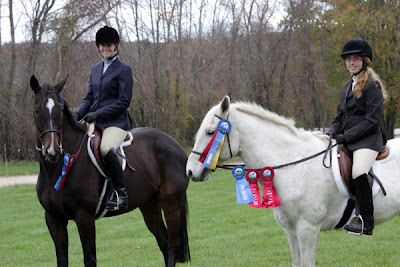 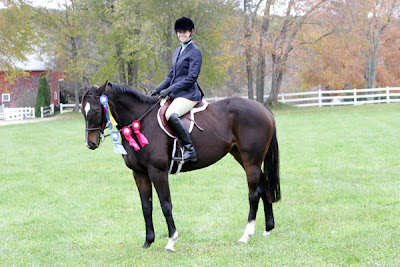 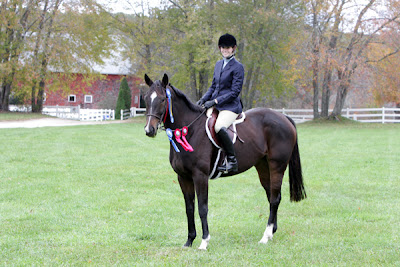 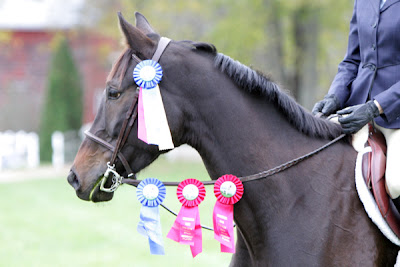 On a side note, check out the contest over at Get My Fix to win a free custom ear net from De La Coeur.