when bad horses get expensive presents

After last weekend's excessively fun rides, I went and spent a lot of money on a beautiful brand new heavy weight Weatherbeeta Freestyle blanket, complete with the detachable neck. I ordered it through my local Dover store because surprisingly, they had the best price on it, but they had to ship it from their warehouse so it did not get here until this weekend. As I was standing at the counter in Dover, signing the credit card receipt, I thought "my horse is so good, she deserves it!"

Wouldn't you know, she was a complete and unholy TERROR this week. She had the first part of the week off because I was dealing with some personal stuff (a friend passed away Sunday night) and on Wednesday I went out there and lunged her first, and then rode. Kenny wanted to ride her but I wanted to get on first to make sure she had a brain, which she did not. I did the best I could but here is some video to give you an idea of what I was working with:

The idea of going from one jump right to the next was to make her think about what's coming up, instead of thinking about throwing a fit. It worked very well.

On Thursday night, I went to work with her again, this time keeping it to ground work. She was outlandishly bad right from the start, at one point rearing straight up in the air. She had the full 21' of lunge line at the time, but as soon as I got her back down to earth I took away most of the length of the line, so she only had about 10' to work with. Gradually she stopped breathing fire and started to listen, and then I felt comfortable giving her more line. By the end of it she was cantering softly around in both directions, and then we did some work disengaging the hind quarters, backing up with her head low, and some stretches. That evening, I got a call to tell me the new blanket was in, so I picked up this lovely new blanket and gave it to a horse that I really did not like very much at the moment! Spoiled mare.

Last night I tried riding again and while she was not quite as bad as she was on Wednesday under saddle, she was still pretty fired up.

So today I sent out some emails to local trainers to see if I could find someone to come and help me out a bit. I feel like I am at the end of my rope, both in ability and patience. I do think that this week, she was a gigantic cow. We'll see if I get any replies. I really hope to figure out how to do a better job with her.

Today I went and picked up a big load of hay with Maddy and Kenny, and that is probably the last present Lucy will get for a while, or at least until she starts behaving herself again.

Here are some photos of Lucy modeling her new blanket: 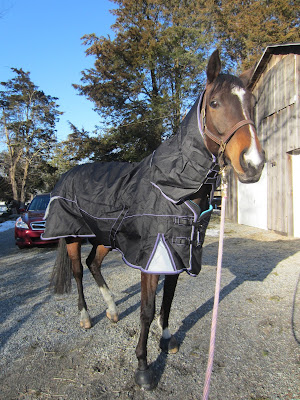 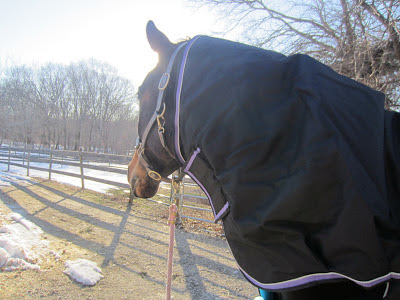 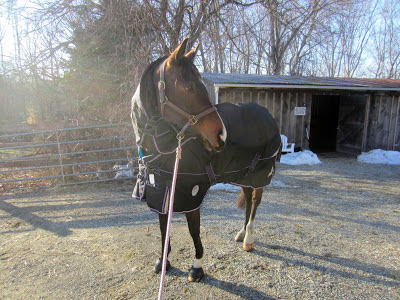