Yesterday I ventured out with my friend Alicia and her horse Mollie, the pair we went to the field with a couple weeks ago. We hit up a really nice trail down the road that I had gone to just the day before with someone from my barn. Lucy had put up a little fight when we had to cross a stream, but after a discussion she went over the stream. Yesterday she put up the SAME fight and I was like, jeez Lucy, we just went through this! But once again she went through it after about 20 minutes of being stupid about it, and just like yesterday I made L go back and forth a bunch of times: 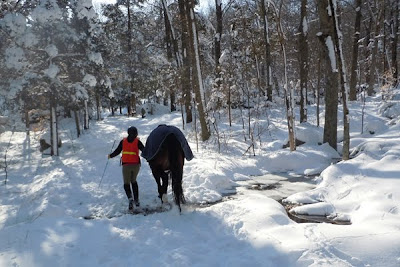 I finally got back on and rode her for the last crossing. Here she is doing a giant deer leap over it even though she had just walked through it FIVE times in a row! Oh well, at least we got across! 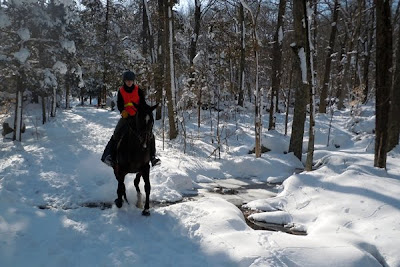 But the thing that REALLY impressed me today about Lucy was that we were trotting along the trail in the snow and all of a sudden Mollie bolted and I heard Alicia saying, "Mollie STOP! Mollie HALT!!!" and then she said as Mollie got closer and closer, "I'm really sorry but we're going to come past you!" and in a chestnut blur, Mollie galloped past us. I was a bit concerned for my safety seeing as I was riding an ex race horse and they tend not to like being passed by another horse who is galloping, so I hung on for dear life as Mollie and Alicia disappeared down the trail. Lucy was mad that I wasn't letting her run but she came back to me easily and without much fuss, and then she walked, though high headed, along the trail! I was so happy with her! eventually I got a little worried because Alicia and Mollie were nowhere to be found, though the hoofprints continued along the trail and not into the woods thank god...so I let Lucy trot, which turned into a canter, and we were actually going along at a good clip down the trail. Mollie had gone about 3/4 of a mile before Alicia was able to pull her up! Boy was I glad when we found them in the next field...but I think Lucy enjoyed playing Search and Rescue! She was quite pleased with herself and I was pleased that I didn't die lol.

When we got back from the trail ride, I decided to take Lucy in the outdoor again because we had so much fun the previous day. I asked a fellow boarder to take some video for me. Here are some screen shots from that video: 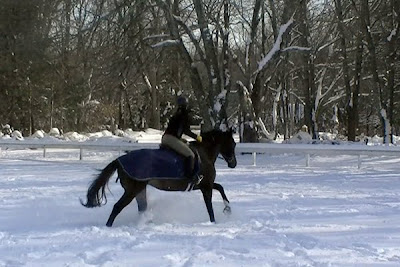 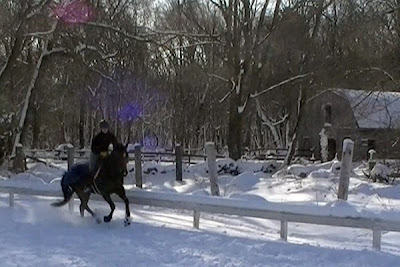 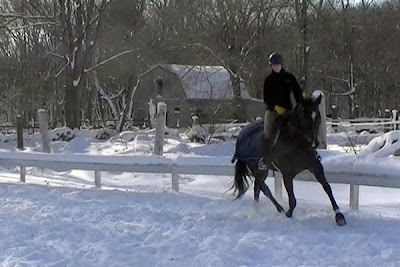 And the video of me riding her in the ring.
Posted by Kate