A trip to the field 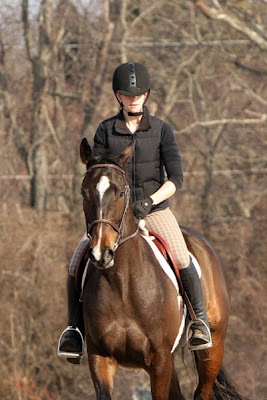 Gosh, sometimes I get SO SICK of going in circles in the ring. Circle left, circle right. Figure 8 (just two circles together)! Halt. Pick up the trot. 20 metre circle. Change rein, another 20 metre circle.

ENOUGH! I think both Lucy and I needed a change of scenery.

I have been itching to go on a trail ride and luckily my friend who boards her horse at the Very Fancy Barn down the road feels the same way. We decided to ride in a field that's at the end of the road our barns are on because her boyfriend wanted to come along on foot, and dragging him along the trails would not be very nice. In a field, however, he could stand in the middle and watch all the action.

So it was settled last night that we'd venture to this field today. For Lucy, it has been a while since she's been in a big field. I hardly slept at all last night worried that she'd be awful, and I wore my grippiest full-seat breeches and my half chaps with suede on the calves so that I'd have as much help keeping my butt in the saddle as possible.

The weather was on our side: it's the first of January today, and it was 51 degrees. In New England. Did I mention it's 1/1? HOLY COW! The sun was shining, what remains of the 20" of snow we got last week was basically pouring off the roads as it melted, and it honestly felt like spring had come three months early. It also helped because Lucy had a fraction less energy than she has when it's really nippy out, thank goodness...

I got to the barn and free lunged her in the indoor. She didn't do as much as I would have hoped for, but I encouraged her to canter around until she was sweating. Then I walked down to my friends barn and met her and her lovely, and I do mean lovely, QH mare Mollie. We continued down to the field and stayed in the back half of it and hacked around. 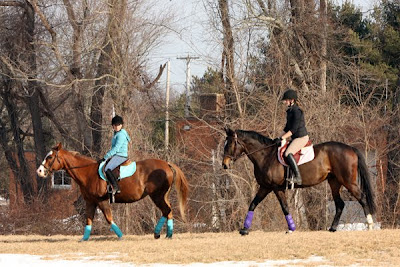 Lucy was really strange. She was either AWFUL, or very nice to ride. It seemed like in half of the circle (yeah, go ahead and laugh, I rant about circles and then what do we do in a gigantic field? CIRCLES...) she was happy to trot around like a big girl, and then in the other half she'd inevitably throw a tantrum. Really annoying, since we didn't get a single full circle of trot without some kind of acrobatics thrown in there. I sat everything really well and tried my best to be fair to the horse, giving releases when I could (and praying that she wouldn't launch me at that second) and praising her constantly. When she acted up we immediately did a one-rein stop and when she stopped, I patted her and we moved on. 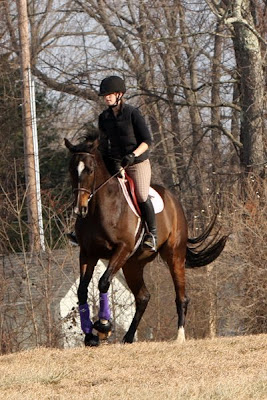 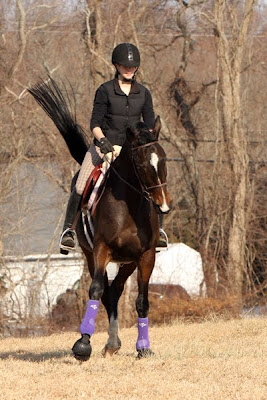 Asking her to yield off my inside leg. Hey, I had to keep her little brain busy!
Mollie was a total superstar and went around practically falling asleep at the yawn factor of it all. :) Lucy, please take notes...

Toward the end of the ride Lucy was getting unpredictable and her tantrums were getting worse and worse so I opted to play it safe and hop off. Probably a good idea because she became very impatient and tried to muscle me around a bit. Sheesh! I might have to go back out there with a lunge line one of these days and put her to work a bit. 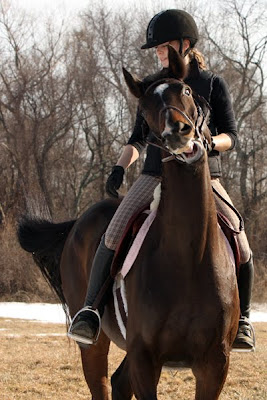 It's all fun and games until someone gets tossed!
Posted by Kate