After my fall last weekend, I knew I had to get back out to the trail asap, before I psyched myself out too much. My best trail riding buddy, Claire, hacked out with me yesterday and we headed to the same trail where I got dumped. 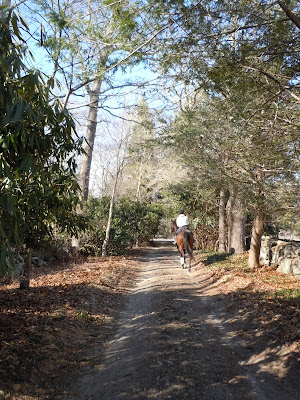 Claire walking ahead of me, heading to the trail.
I hand-walked Lucy all the way to the trail head. She was great on the road but spooky at the trail entrance. She spooked at the exact same spot gave us issues last week. I have no idea what she's seeing, but when she spooked, I made her stand there and take in the sites a bit. Once she started looking bored, we continued onto the trail head, where I got on without incident. 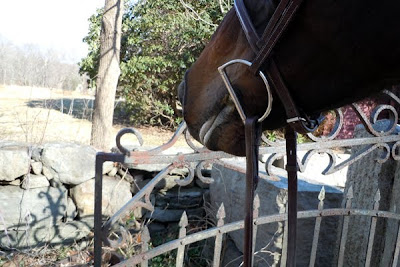 Making her stop and look at the gate that spooked her last week.
Overall Lucy was pretty good on the trail. She spooked at something in the first five minutes but it wasn't a bad spook. Still, I didn't trust her enough to give her any extra rein, which proved to be a good decision later in the ride, when she spooked again and I lost my balance. It wasn't even a bad spook, but she jumped to the right and I came off over her left shoulder. Here's the cool part, though: I landed on my feet, AND she did not attempt to run! I was back in the saddle within a minute, and we continued on with the ride. I don't know why all of a sudden I can't seem to sit anything, but I am sure it will pass. I am just glad today's episode was not nearly as dramatic as last week's! I am very proud of her for not bolting, and I am considering a new career as a gymnast (just kidding, I'd make a terrible gymnast!). 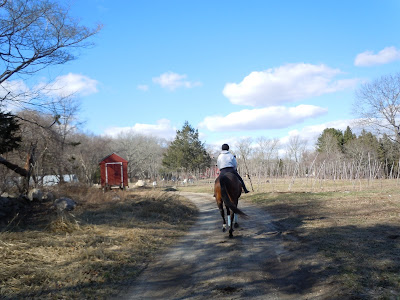 Another shot of Claire and her horse Boe, this time almost at the end of the trail.
The funniest part of the whole ride happened on the walk back to the barn. A couple was walking their dog on the other side, and they kept staring at me and Lucy as we approached each other. I called out a hello as we passed and the man said to me, "that horse looks an awful lot like the one that was galloping down the road last week!" I laughed and said, "yes, this is the one!" The man proceeded to tell me that he was in his kitchen and heard hoofbeats approaching, and he looked out the window as Lucy "shot past" his house at "top speed", and also how it was "the talk of the neighbourhood". Anyway, I thought that was hilarious. Lucy sure knows how to make an impression!
Posted by Kate