Most importantly: we survived, and I didn't fall off! hah! 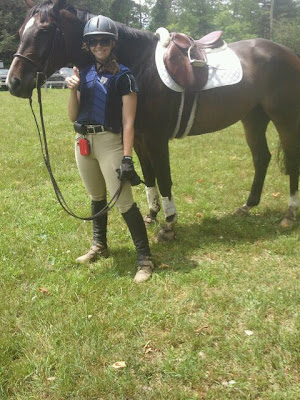 Now for the positive things:

Lu loaded GREAT at the barn, trailered quietly with Boe, and unloaded fine once we got to the hunter pace. She was excellent to tack up, had no problems with the bright blue tent that the hunter pace officials were hanging out under next to the warm-up area, and stood quietly for me to mount up. She was SO BRAVE on the ride itself and around mile 3, actually settled down and had the most lovely stretchy trot on loose contact. She wasn't fighting to go faster and really got into a rhythm and was honestly a pleasure and a joy to work with. We had three stretches of canter. The last one was excellent and I even let her "go" a little bit :D She got worried when a little Paso Fino that was absolutely out of its MIND ran up behind us but she listened to my "woah" and held it together while he passed us (running sideways, might I add).

I had to get off and get back on three times in the first 200 feet of the ride. The first one was because she refused to step down off the road we had to cross to get to the trail head and onto the trail itself. There was about an 8" drop and she was being stupid about it. I hopped off and led her onto the trail and got back on. The second time was about five seconds later when she flat out refused to go through a muddy puddle, so I had to get off and lead her through that (and the muddy water went right through my paddock boots, oh joy). I wiped them off as well as I could and got back on. About five seconds later a group of horses was coming back from the ride and had to pass us. This particular area was very narrow, with a fence on one side and thick brush on the other. There really was not space for horses to pass each other and I don't know why the ride organizers arranged for that, because Boe was incredibly unhappy about being passed in such close quarters and kicked out. Lucy is in RAGING heat right now (yeah, I know, perfect timing) and squealed and kicked out with her front feet at the horses going past her. I had to hop off again and pin her against the fence to let people by. Finally I got back on the third time and luckily I stayed in the saddle for the whole ride :D

The biggest disappointment was that after behaving so well for the ride, she flat out refused to get back on the trailer when we were finished. She has NEVER had an issue with trailering. She has happily walked right on every single time we've gone somewhere. She wasn't afraid of the trailer and this was simply a "I don't wanna and you're gonna have to make me!" moment. She decided she did not want to get on that trailer, and it took us 45 minutes to get her to change her mind. She fought. She reared up. She tried flying backwards and at one point got the leadrope out of Claire's hand and trotted off and behind some trees. I was like, come on horse, could we have one outing where you don't REALLY embarrass me?!?!?!?!? The funniest part was that she trotted off, disappeared behind some trees, and then a second later reappeared and trotted right to me looking totally lost.

Eventually we enlisted the help of a friend and she was able to knock some sense into Lucy. I say "knock" because that horse kind of got her hind end handed to her and she deserved every part of it. She was totally disregarding everyones' personal space and was running through people to avoid the trailer. At one point I was close to tears because I was so disappointed in her, but before I knew it she gave up the fight and literally walked on quiet as a mouse. Then she happily stood in there and munched hay for an hour with Boe while Claire and I had lunch. The fact she stood on there totally relaxed like that almost makes me more mad when I think about the 45 minute battle we had to have to get her to load up. She really was giving us all the proverbial horsey middle finger!

Overall, though, I am happy with her. She behaved herself impeccably on the trail ride and we even did a little jump! I was really proud of her for cantering so nicely along with Boe. She could have easily gotten upset about him running next to her, or gotten silly, or tried to take off, but she was very good.
Posted by Kate