In the middle of the week, I got to the barn to find a whiteboard instructing people to reserve the indoor for any upcoming riding/lessons/truck-ins. There was no explanation as to why all of a sudden we had to do this. I've never boarded at a barn that made boarders reserve the indoor...I figure we're all mature adults who can ride fairly well, and as long as our horses aren't complete nut jobs, we can share the ring. At one point late in the week last week, we had four young TB's ranging from 15.3hh all the way to 17.3hh in the ring at the same time, and no one died! So why did we now have to schedule our time?

Anyway, because of the lack of an explanation, all of us were kind of freaking out over it, and I was supremely annoyed. I went home and ranted to poor Kenny about privileges being taken away and micro-management of things that were going along perfectly fine by themselves.

On Sunday, I had to do stalls and while I was there, someone who knew more about what the sign was for clarified it for me. The reason they put it up was that there are going to be people trucking in from outside with their horses to rent the indoor, but just because they were renting it does not mean that the boarders at the farm can't use it at the same time. Furthermore, the board is really for scheduled lessons, so that everyone's aware of when someone else might be in the ring with them, should they want to come and school their horse.

A lot of the horses at the barn are either retired, laid up with injuries, or their owners don't ride very often. I've arrived at the barn and found it dark and deserted more often than finding someone else there, especially someone who is going to ride. I enjoy riding with other people...this is why I wanted to board at a barn. The horse I rode before I bought Lucy lived with just one other mare in a backyard situation, and I got so lonely sometimes with having no one else to ride with.

There is often a lot of drama in barns. I don't think it's a hunter thing, or a dressage thing, or a western thing. It's a horse thing. So much of it is based on "he said/she said" or poor communication. Next time, before freaking out, I'll just call the source for more information and then base my reaction on what I hear from them!

I did not ride on Sunday, because it was freezing outside and snowing. It took me over four hours just to muck five stalls and do water and grain! It was nuts. After I finished with the chores, though, I did let Lucy out into the outdoor and she trotted around for a few minutes. 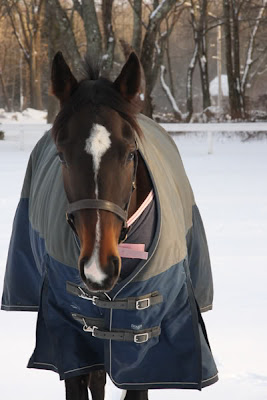 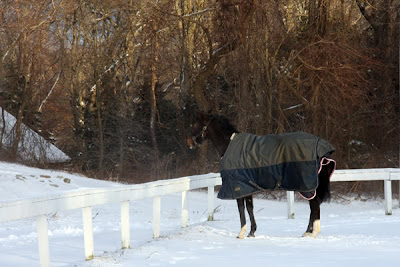 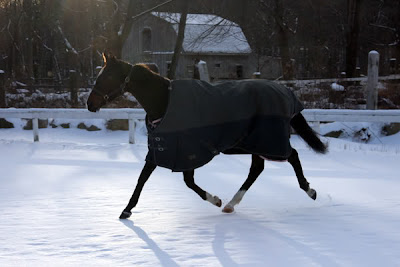