I was worried that Lucy was scarred for life after the close call with the inconsiderate driver in the jeep yesterday, so I was prepared for battle this morning when I took her out for a walk on the road. This time, though, I tacked her up before leaving just in case I had enough faith in her by the time we reached the big field at the end of the street to get on. It was just us because the barn was otherwise deserted. Yeah, I was feeling brave!!

She did great with the cars passing her, and only got excited when we walked past Heritage, because all of the horses in the fields were going NUTS. They were running, bucking, squealing and kicking at each other, all having a blast in general. She was trotting in place beside me with her tail flagged and ears pricked as much as physically possible, but she behaved herself and didn't make a fuss about walking away from the farm.

We got to the field and she looked at everything, but I didn't get a "nutso" vibe from her at all so I decided to get on. She stood perfectly still while I tightened the girth and climbed on (she is tall and we were on a hill, so this was no small task!) and then calmly started walking. We walked the perimeter of the field in both directions twice. Cars traveled along two sides of the field, as it sits next to a four-way intersection, but she didn't seem to mind. We even had a little trot! We discovered a back field that linked to the one we were in, so we explored a bit. There was a large tree filled with little black birds and of course they all exploded out of the tree when we got close, and she spooked at that, but she didn't go anywhere; it was more a shy than anything else.

I talked to her the entire time, telling her what a good/pretty/clever girl she was. I also had cookies with me so I'd give her one every few minutes. When it was time to go home, she started getting excited about going in that direction, which included flipping her head and prancing, so then she got to stand for five minutes, and that solved that problem! I hopped off and ran my stirrups up, and then we walked home with no issues. 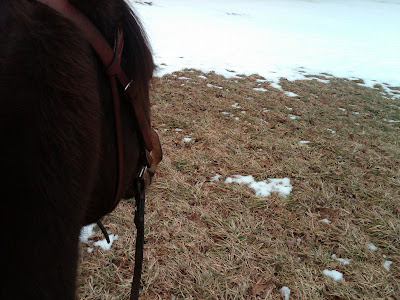