Friends, I fear that my fun in the snow may be coming to an end, as we are gearing up for an ice storm tonight into tomorrow that will supposedly dump 1/2" of solid ice on this area. I really hope that all the Rhode Islanders who have been whining non-stop about the snow we've gotten are happy with themselves. Personally I'd rather have snow than ice any day but this time it doesn't look like we're going to get a choice. If the outdoor and trails get a nice 1/2" glaze of ice on them, there will be no more riding out there. We will be confined to the indoor.

Not going to lie, I am a bit concerned about that.

The good news is that beyond the soap-eating incident of 2011, we had a nice ride last night. I free-lunged Lucy before getting on and worked on transitions to get her really paying attention to me. She was pretty good even though it's been a while since I have practiced that with her.

I tacked up and hopped on, and we spent about ten minutes warming up at the walk. Another boarder had set up three crossrails in the ring and I practiced circling L around them and moving her ribcage over each time we changed direction.

Then I picked up the trot, and Lucy was like AW HELL NO! and threw a tantrum. She refused to go forward and when I booted her a few times she kicked out. Finally I got her to go forward and made a beeline for the crop rack on by the door. I grabbed one as we went by and showed it to her. "See?" I told her, "I have a pony beater now." She trotted nicely around half of the ring and then once again got all bottled up even though I was really urging her forward and kicked out again. This time her foot connected with the side of the indoor and she left a nice hoof-shaped hole there. I took the crop and gave her a smart whack right on the shoulder and yelled CUT IT OUT! When she moved forward again I praised her and proceeded on like nothing had happened.

And after that little display, she was really good! There were even moment of self-carriage and lightness at the canter. To top it off, I took her over one of the crossrails that was set up on the diagonal and she was so good. She trotted happily up to them and cantered softly away. She halted easily at the corners of the ring.

And I will leave you with some photos of her in the outdoor from this past weekend when it was 35* and sunny, because sadly they will most likely be the last ones I take of her out there before Spring if we are really getting that 1/2" of ice: 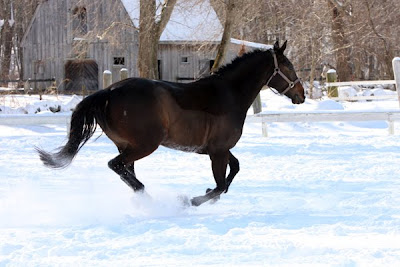 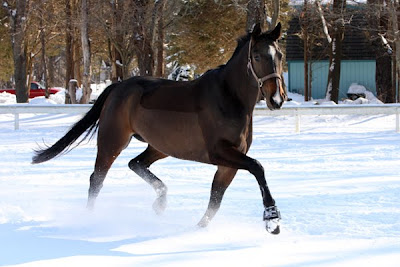 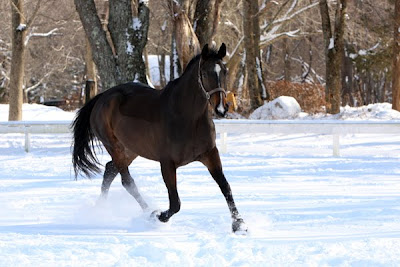 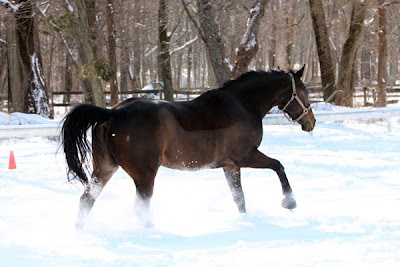 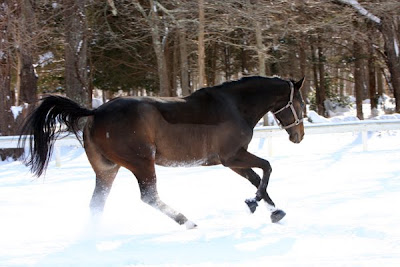